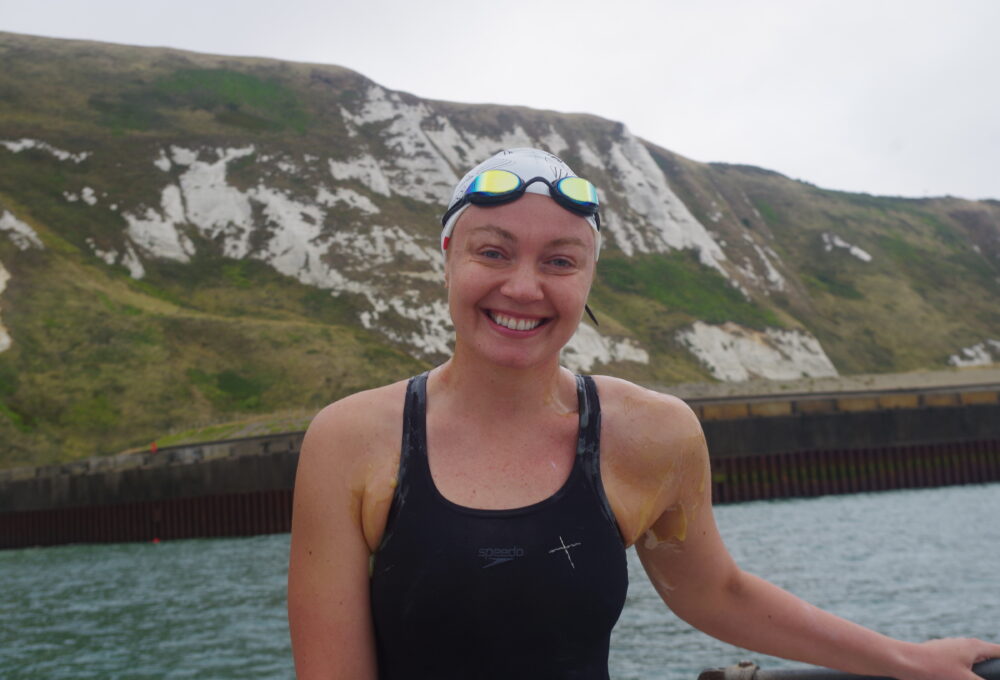 Posted at 20:10h in Latest Posts by Michelle Weber

Tuesday the 16th August couldn’t come soon enough. I had spent the last year preparing myself mentally, physically, emotionally and all the other ally’s you can think of for a 35km swim from Dover, England to Calais, France. My one-week window for the Channel was opening from the 18th-25th August. With flights, visas and vaccines all in check I was set to land in London Heathrow Airport in the early hours of the 17th. Where I’d catch a train into Dover to meet Debbie and Derrick (my support) and Josh and Troy (the other two South Africans swimming the Channel that week). Upon arrival we discussed the logistics of the swim, our slot order (Troy being first up and myself and Josh second). We looked at the weather for the coming week, had a cup of coffee then from there I checked-in with Debbie and Derrick at a self-catering in Knightsbridge for an early nights sleep.

My week in Dover had me heading out to the Dover harbour each morning for a training swim where I’d often bump into other swimmers. Some who were UK based and others who were internationals. But most who were looking to swim the channel in that coming week. We chatted away, mostly swim related stuff… trying to predict when we’d be swimming, how fast we’ll be swimming and if successful – would we come back to do it again?.. Of which most said no. Near the harbour my eye caught a channel memorial plate which said that there were 3 types of people who swim the channel:

When looking at it I realised that that was me.. Miss Number 3, Miss I Had No Idea What I Was Doing Here. And it was in that moment that the vastness of the swim suddenly dawned on me and the nerves started to kick in. I knew I wanted a fast time but I also knew deep down that if the Channel wasn’t in my favour I’d be happy with a finish. I prepared the best I could, with many 14C cold swims, long 12km+ open water swims, a 20km pool challenge and 80km training weeks… I did the best I could and was happy with that.

Since the weather on the channel changes so quickly, we don’t know the day we’re swimming until a 18:30 confirmation from the pilot the night before. And with weather not playing in our favour – the first couple of days was all just one big waiting game. The 24th (our second to last day before our window closed) and it was starting to look like a near perfect day for both myself and Josh where we were likely to start in the early hours of the morning. By 18:00 on the 23rd, I got the official high-five from Derrick and we were set for a 8:30am start the following morning.

A 5am wake-up, shower, light breakfast (oats, fruit, future life) and a short stretch to warm up my arms and shoulders was all lined up on the morning before driving to Folkestone where myself, Derrick and Debbie would meet Josh for his swim start. After dropping Debbie off, myself and Derrick headed to Dover Harbour for the start of mine. On the drive I was blasting music through my earphones (I have an extensive playlist – which I’ll probably still share later) however, I had the same two thoughts running through my head:

We arrived to Dover Harbour where swim start was set to begin at 8:30am and with me being properly nervous!! But once on the boat and heading towards the start – every nerve turned into pure joy and all I could think was that this must be the most incredible thing I’ve ever done!! And if I had to swim in this water for the next three days I’d be very happy do so!!! 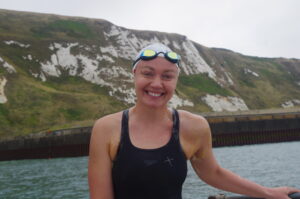 This thought kept me smiling and had my head busy for the first 15km of the swim of which we were blessed with the most beautiful conditions… flat water, the sun out and the tide in our favour – everything a channel swimmer would want for their swim.

I had my feeds planned accordingly. I had to make sure I was getting enough fluids in, the correct amount of carbs and proteins too. So feeds were on the first and second hour and thereafter each feed was 30 minutes apart. My feeds were made up of a wide range of drink mixes and treats to get my mind off the 12 hours of pain I might be experiencing throughout the next 35km with my top 3 being:

After about 3 hours of swimming I could see the shores of France. I looked to the crew and said, “hey, look! I can see France! We must be about 10km to go!” When I put my head back down to continue swimming, I took a breath to the left and saw everyone on board look at each other in a slight panic – I immediately knew we were MUCH further than 10km away. It turned out, when we were at this point I was actually more than 20km away and it was also at this point that the tide began to turn… and was turning fast! I continued swimming for about an hour in which it felt like we covered 2km (less than half my normal swim speed). I again asked how much further we had to go but with the tide turning so quickly no one could really say and I knew at this point I could only really just keep swimming.

I decided on an easy tactic going forward, I was going to spin my arms until they couldn’t anymore. And when my arms were tired, I’d use my legs. And when my legs were tired, I’d use my head. And when my head couldn’t anymore, I’d say a prayer and by the time I said, “Amen,” I’d do it all over again. I repeated and repeated and repeated this through and through and with the sun beginning to set, I repeated it again. Through the wind, the dark and cold water. Until the next thing I knew… FRANCE!!! Finishing on the shores of Wissant, with a new South African Female Record of 10h21 minutes ❤️.

On french shores I made sure to take a moment to look at the little house I finished in front of, squished my toes through the warm sand, took a couple of deep breathes then ran the tips of my fingers along the top of the water until swimming back to the boat (as the dingy that was suppose to fetch me broke). Once on board, there were cheers, photographs and high-fives all around by the crew until we started heading back home (well.. to Dover that is).

You could never put into words how difficult the swim is, it’s SUCH a difficult swim. You can only really say that it’s a hard swim and that no crossing is ever the same. Each swim and swimmer has a different tide, current, wind direction and water temp. You can only say that it’s something you’ll have to do. Something you’ll have to get in with a never give-up attitude, figure it out along the way and do. 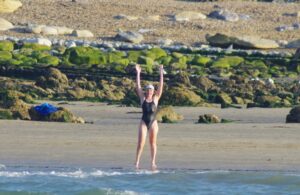 Two years ago I vowed that I would never dedicate a swim to my mother as I didn’t think I would ever find one that would ever be big enough. But while traveling home, I just realised – that this ones for you mom. Rest In Peace. I love you forever. 🫶

And to the people in my life, I couldn’t thank you enough. To my dad, my family and friends – thank you. And to those who sent their well wishes and motivation along the way, thank you to you too… there are some seriously good people out there and I’ve seen it ALL. Xx

all my love, Michelle.

Swimming through the shipping lane 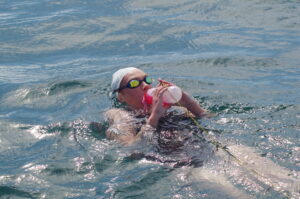 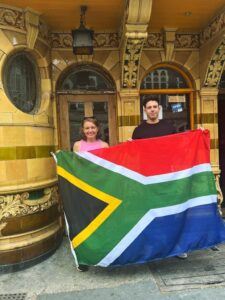 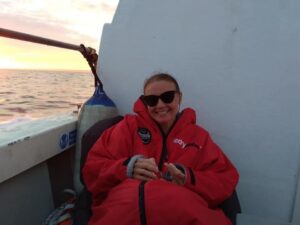